OK, I mentioned in Cuda's "Shit I think my car was totaled" thread that my college son was in a minor fender-bender a couple of weeks ago in the '06 955S (157k+ miles). Actually, he wasn't driving - their fraternity pledge class was returning from a "walk-out" weekend in Ohio and his pledge brother was driving at the time and it was his fault. Anyhow, minor accident. But, my insurance company (USAA) is paying the claim to the other vehicle. As it turns out, since we didn't have collision insurance on our Cayenne, the driver's insurance policy will cover it (just so happens the driver had USAA also). So, insurance is going to pay. Today, we took it in for an estimate. It's basically the front bumper cover, the driver side headlight and then the very front corner of the left front fender is buggered up a bit. The repair estimate was over $4,700, or as the body shop estimator said "75% of the way to totaling it out."

USAA is giving me the option of having the shop repair it or writing me a check and letting me get it fixed on my own. Here's what I've found so far:

I can buy a used front bumper unit with the grills and lower spoiler in good shape, but the wrong color, for around $650 shipped. Would need to get it prepped and sprayed. Probably around $750 or $800 for a local shop to do that.

I can buy a brand new set of Valeo headlights (left and right) from Warehouse33auto.com for $644 shipped. That way they are new and would match. I could buy a used driver's side only headlight off ebay for $230 and just polish both sides up.

New sidemarker light is about $35.

Figure $500 for the repair to the fender.

Also, a question. When I bought the Cayenne a couple of years ago, the rear bumper cover was buggered up, and I just happened to find one on ebay the same color (lapis blue). If I could find a decent front bumper unit in lapis blue, I could save $750 in having it prepped and sprayed. Other than just dumb luck in running across one on ebay, is there any way to search for a used bumper cover in a certain color? I found a salvage yard selling parts from a 2004 and a 2006 model in lapis blue that showed pics of intact front ends, and I sent them a message on ebay to see if they might have the bumper cover from one of those cars. Any other ideas to find one I wouldn't have to prep and paint? 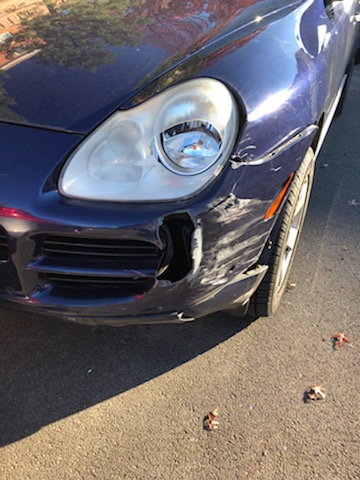 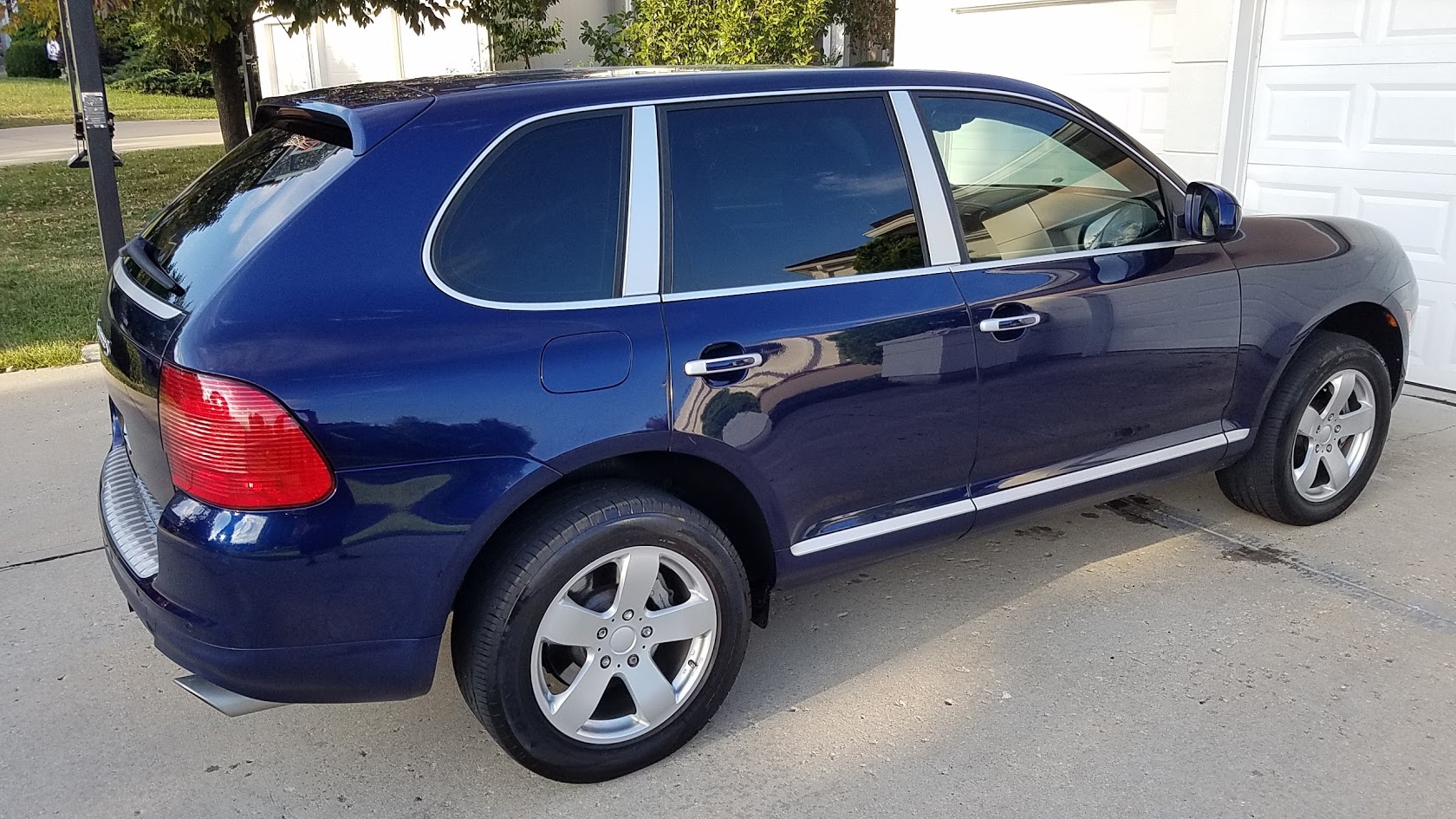 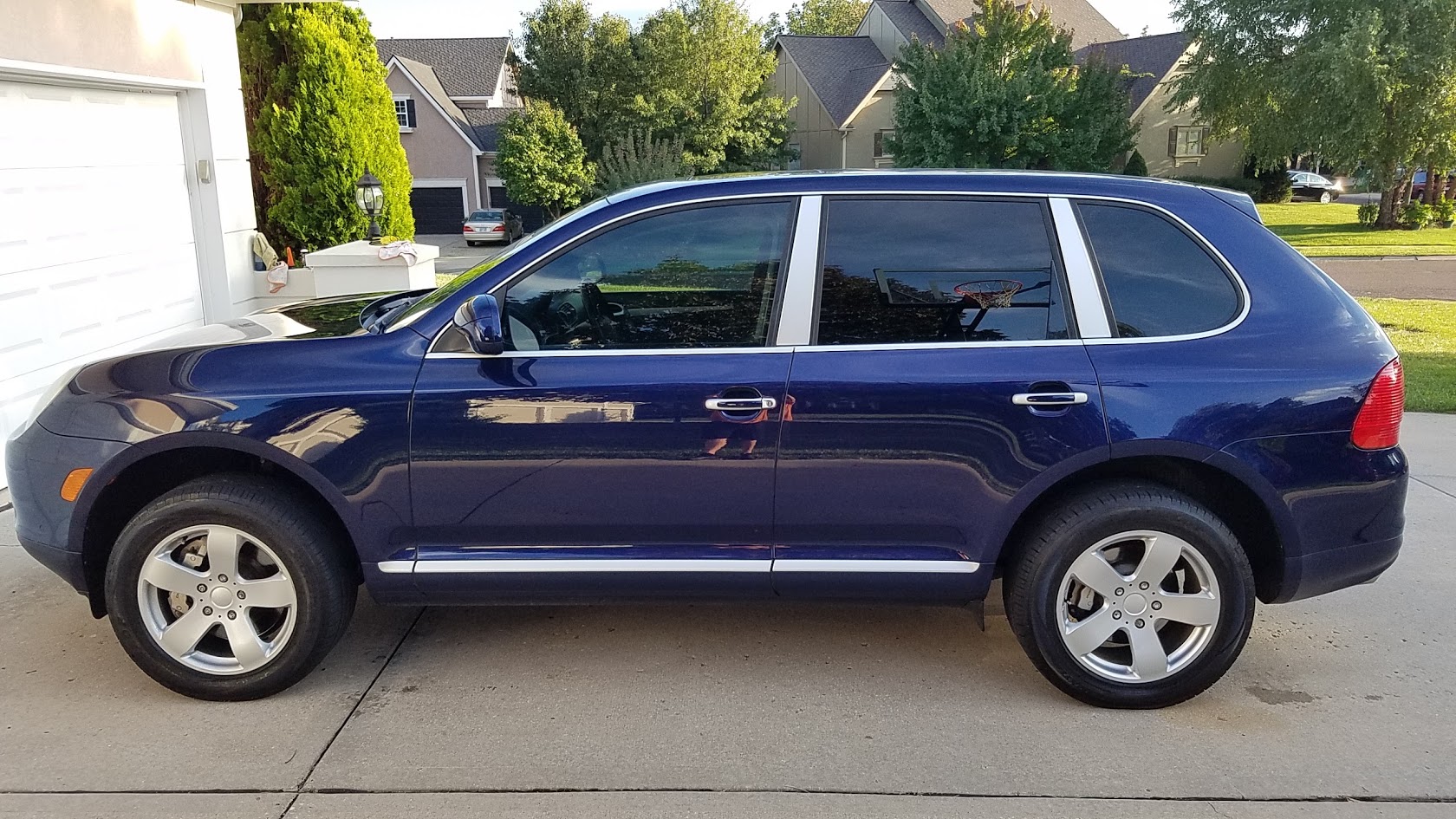 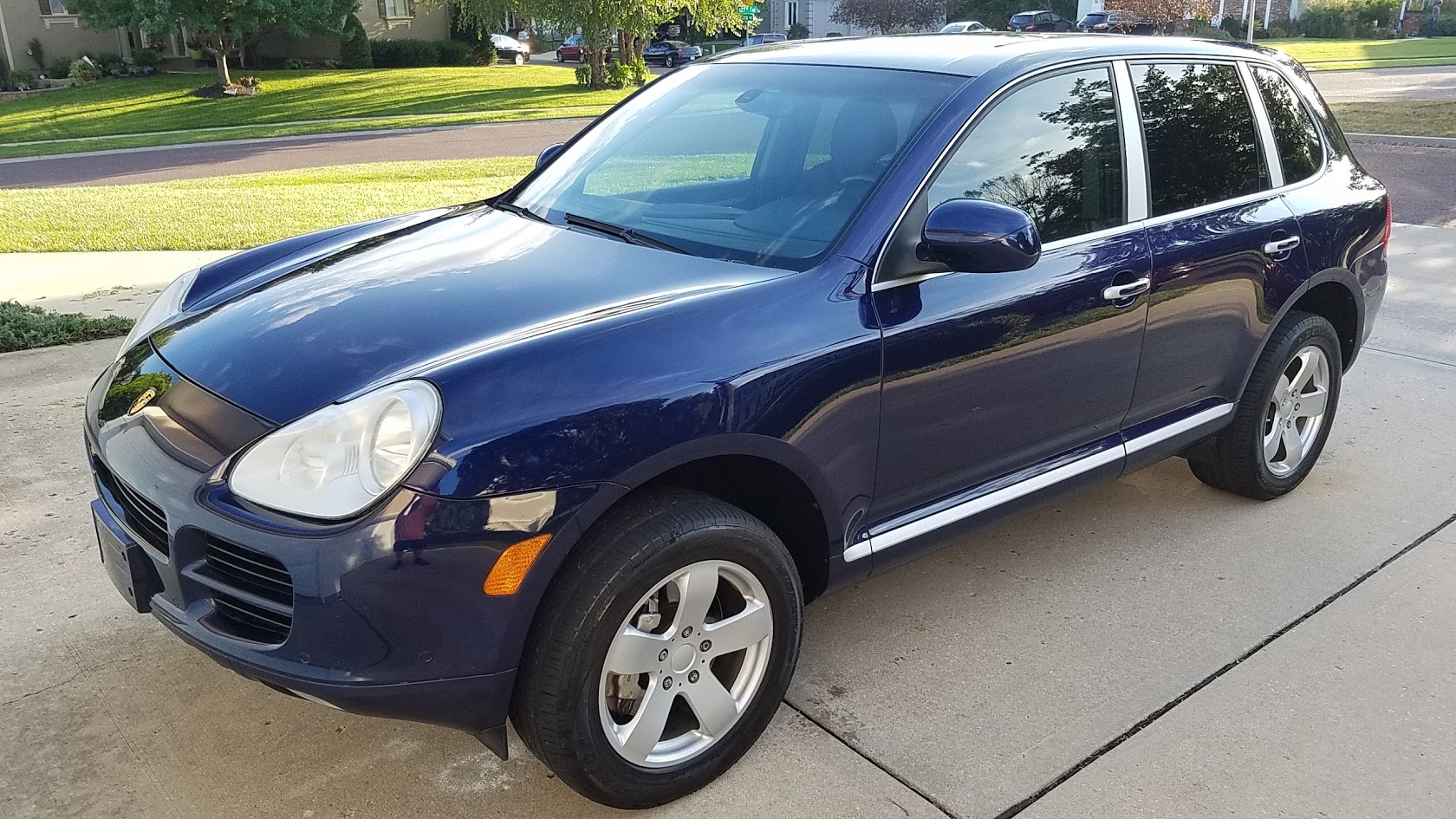 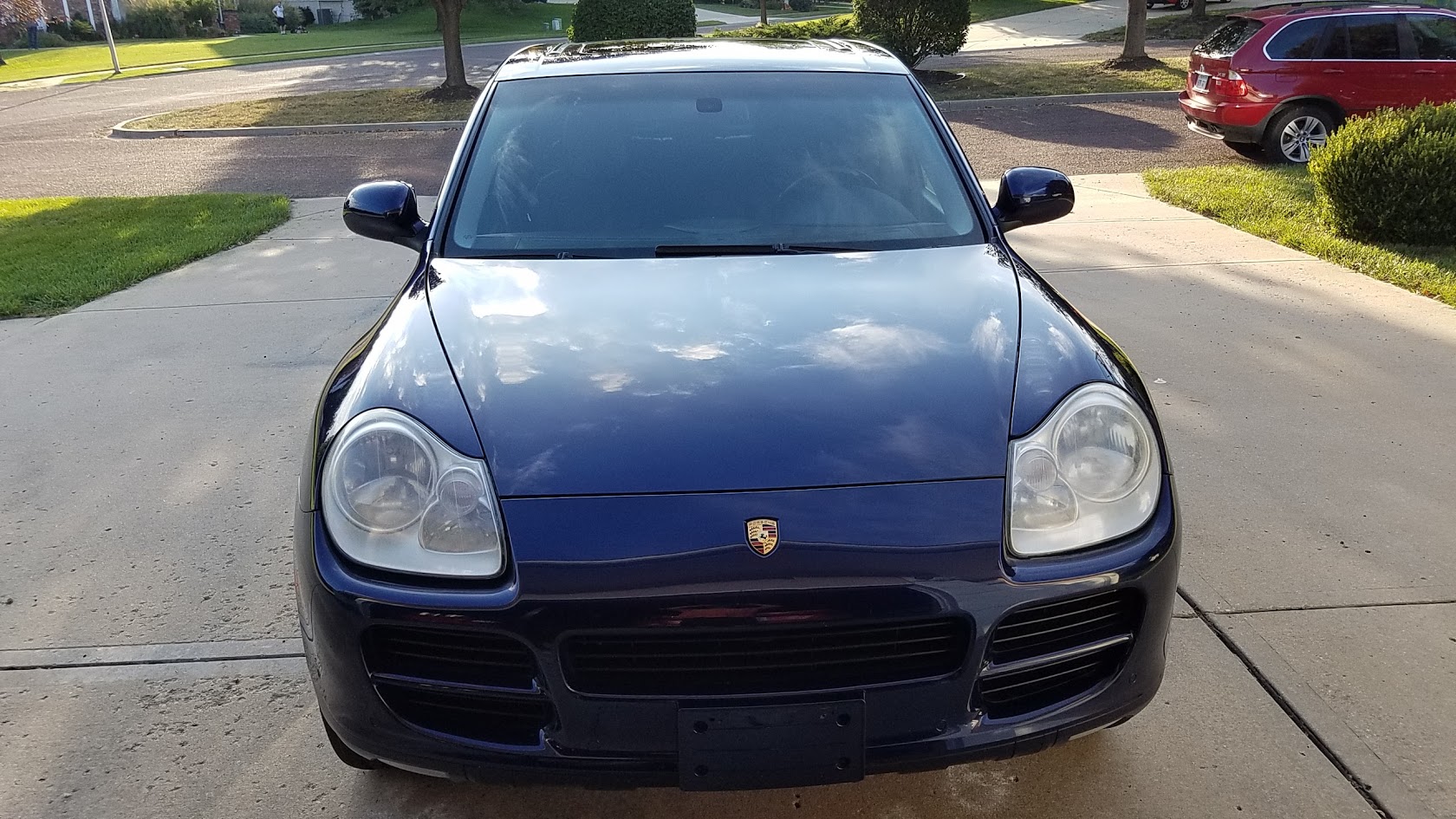 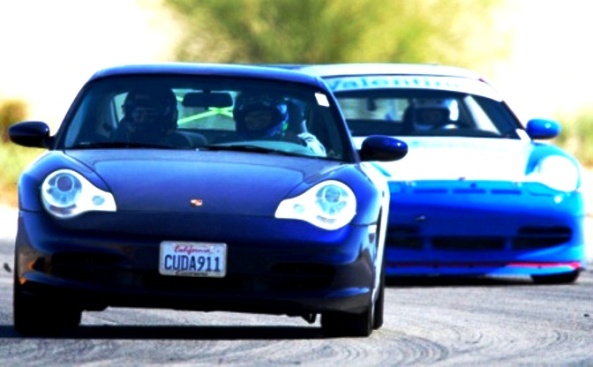 How about order the paint in a spray can and paint it yourself? Shouldn't be hard to get a good job on the front bumper, since there aren't a lot of large flat areas on the bumper (the big flat areas are where it's hard to do a good rattle-can job).
Mike
Board of Directors, Treasurer-elect, AX Instructor - PCA-SDR

Well, even though it has been relegated to duty as my son's college car, I'd still like to have it look nice. I'm pretty sure I'd screw up a rattle can paint job if I try it myself. But, good idea.

I heard back from the dismantler on ebay that appeared to have 2 lapis blue Cayennes parting out, but no luck there. You could fly out to see your other son and then use that $4700 to road trip home in this: https://www.porschetysonscorner.com/det ... 03110.html

Color isn't right, but you could use it as a part source to keep the S going strong!
Top

FRUNKenstein wrote: ↑
Wed Nov 21, 2018 7:25 pm
I'm surprised, really surprised, that a Porsche dealer would have that vehicle in its inventory.

I kind of agree, but maybe it is a good bait car (I can get a Porsche for under $5k!!!!) and then they up sell the crap out of you.
Top

I mean hell. I don't need another Cayenne and I don't even particularly like that one, but for that price it has crossed my mind to start being the Cuda of Porsche SUVs...
Top

KC, why not buy a headlight, bend the fender out a bit, and rattle can the bumper and fender parts.

The car is a beater, so I don't see how spending the 50% of car's value on repairs makes sense here. I mean the retail value of the car is around $5-6k on the street.

I get the wanting the car to look good, but this is your son's college car. He uses it for road trips with homies. It isn't a show car, and even perfectly polished it wont be getting him any pussy.... Because it screams: my dad passed this down to me

The car is a beater, so I don't see how spending the 50% of car's value on repairs makes sense here. I mean the retail value of the car is around $5-6k on the street.

I get the wanting the car to look good, but this is your son's college car. He uses it for road trips with homies. It isn't a show car, and even perfectly polished it wont be getting him any pussy.... Because it screams: my dad passed this down to me